Sing a Song of Passwords 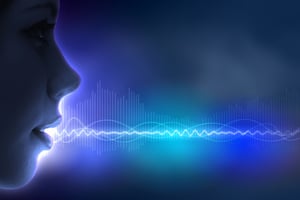 The voice. It allows us to communicate with each other, to share emotions through laughter, sobs, and songs. It can now also let us access our accounts. With multi-factor authentication enabled on certain accounts, we can use our voices as a second form of credential. In addition to our password which isn’t a reliable security credential, our voice is a lot more reliable. Only you can produce your voice, and there’s a bit of science behind how it’s recognized.

According to HowStuffWorks, the voice sensor breaks the sound waves from your voice down into a digital audio recording. Then, it checks these sounds you make, or phonemes which form the sounds within a word, against its databases to find the most likely word match. It is not always accurate, however, and although innovative, their identification still needs to find a way around background machines, grainy mic interference, and loud crowds nearby. In addition to this, one reporter from the UK had his identical twin hack his bank account to bring the security risks of voice recognition into public eye.

Then again, it’s to be expected these machines aren’t perfect. We humans, the speakers of these languages, often use regional accents which make words hard to decipher. And our hearing isn’t always the best either—just ask me about mishearing the YES song “Roundabout” where llamas come out of the sky and they stand there. My friend group still hasn’t gotten over these horribly misheard lyrics.

And I can’t get over all the linguistics and computer science that have built up voice biometric authentication to where it is today. We started with the discrete model, which required end users to pause after every word. It had lots of trouble with homonyms, two words spelled differently that are pronounced the same. These are difficult for programs to distinguish between. However, improvements to the discrete model were planned and tested, morphing into the continuous model of linguistics. At the culmination of this continuous model is China’s search engine giant, Baidu. Their project Deep Peak 2 has rolled out developments this year allowing for recognition of various Chinese dialects, mixed Chinese and English languages, and longer, more complex sentences.

VoiceIt.io's voice biometric authentication has solved several problems as well. They have built-in features that adjust the mic sensitivity to background environments, reducing the problems from noise or mic interference. This voice biometric authentication supports nearly 90 languages and protects against voice duplication. This means that reporter’s twin wouldn’t get 20 tries to mimic his brother’s voice—his account would be locked on the first try.

The future is here, and it can hear you.